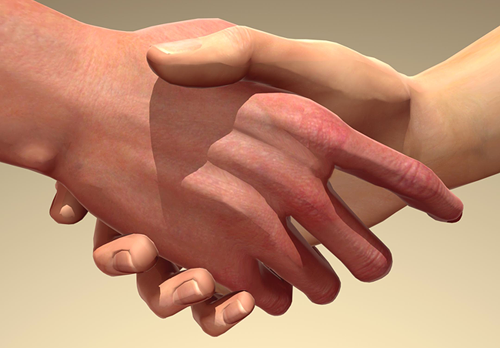 Animated human characters in everyday scenarios must interact with the environment using their hands. Captured human motion can provide a database of realistic examples. However, examples involving contact are difficult to edit and retarget; realism can suffer when a grasp does not appear secure or when an apparent impact does not disturb the hand or the object. Physically based simulations can preserve plausibility through simulating interaction forces. However, such physical models must be driven by a controller, and creating effective controllers for new motion tasks remains a challenge. In this project, we present a controller for physically based grasping that draws from motion capture data. Our controller explicitly includes passive and active components to uphold compliant yet controllable motion, and it adds compensation for movement of the arm and for gravity to make the behavior of passive and active components less dependent on the dynamics of arm motion. Given a set of motion capture grasp examples, our system solves for all but a small set of parameters for this controller automatically. We demonstrate results for tasks including grasping and two-hand interaction and show that a controller derived from a single motion capture example can be used to form grasps of different object geometries.