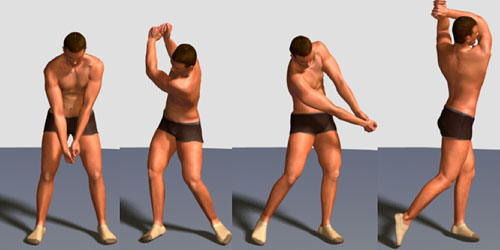 During dynamic activities, the surface of the human body moves in many subtle but visually significant ways: bending, bulging, jiggling, and stretching. We present a technique for capturing and animating those motions using a commercial motion capture system and approximately 350 markers. Although the number of markers is significantly larger than that used in conventional motion capture, it is only a sparse representation of the true shape of the body. We supplement this sparse sample with a detailed, actor-specific surface model. The motion of the skin can then be computed by segmenting the markers into the motion of a set of rigid parts and a residual deformation (approximated first as a quadratic transformation and then with radial basis functions). We demonstrate the power of this approach by capturing flexing muscles, high frequency motions, and abrupt decelerations on several actors. We compare these results both to conventional motion capture and skinning and to synchronized video of the actors.