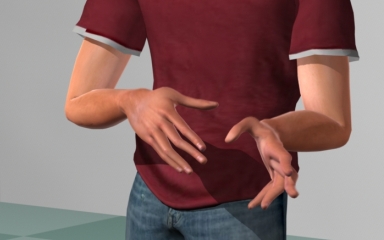 {In this paper, we explore the perception of finger motions of virtual characters. In three experiments, designed to investigate finger motions of animations, we asked the following questions: When are errors in finger motions noticeable? What are the consequences of these errors? What animation method should we recommend? We found that synchronization errors of as little as 0.1s can be detected, but that the perceptibility of errors is highly dependent on the type of motion. Errors in finger animations can change the interpretation of a scene even without altering its perceived quality. Finally, out of the four conditions tested - original motion capture, no motions, keyframed animation and randomly selected motions - the original motion captured movements were rated as having the highest quality.