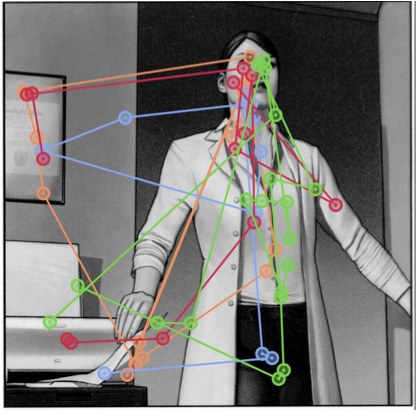 {Comics are a compelling, though complex, visual storytelling medium. Researchers are interested in the process of comic art creation to be able to automatically tell new stories, and also, summarize videos and catalog large collections of photographs for example. A primary organizing principle used by artists to lay out the components of comic art (panels, word bubbles, objects inside each panel) is to lead the viewer's attention along a deliberate visual route that reveals the narrative. If artists are successful in leading viewer attention, then their intended visual route would be accessible through recorded viewer attention, i.e., eyetracking data. In this paper, we conduct an experiment to verify if artists are successful in their goal of leading viewer gaze. We eyetrack viewers on images taken from comic books, as well as photographs taken by experts, amateur photographers and a robot. Our data analyses show that there is increased consistency in viewer gaze for comic pictures versus photographs taken by a robot and by amateur photographers, thus confirming that comic artists do indeed direct the flow of viewer attention.